Kucoin - A Modern Cryptocurrency Exchange for All Traders 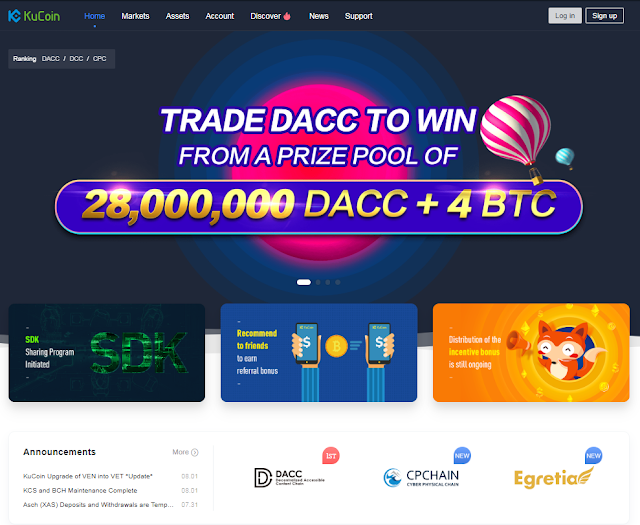 
If you are looking for a secure yet modern platform that you can use for trading cryptocurrencies, one of the best options at your disposal is Kucoin. A group of people in the having a passion for Blockchain founded this cryptocurrency exchange. These individuals had developed strong reputations and experience after working at various industry giants such as Ant Financial, GF Securities, Jianbang Communication, Youling and iBOX Pay. The aim of Kucoin is to provide traders with a straightforward and safe method for converting their currencies. This state-of-the-art platform might be a relatively new addition to the world of cryptocurrency exchanges, but its team has proven itself and its launch has gone quite smoothly.

In May 2017, Kucoin’s research and development team was created and in August, an Angel investment was made with V1.0 going live a couple of days later. Since then, the Kucoin Bonus Plan has been launched by the team, along with mobile apps for both iOS and Android users and several additional currencies. Sure, the cryptocurrency exchange might be young, but the founders have been working on blockchain technology since 2011. Plus, the technical architecture of the platform was established back in 2013, which gave the founding team a chance to iron out any problems and provide a seamless service to users.

When you decide to register on Kucoin, you will see that it is quite simple. You are required to provide your name and email address and verification instructions are sent to you. After you have logged into your account, you can easily keep track of your assets, make changes to the different settings and also manage your rewards such as Kucoin bonuses or invitation bonuses. Even if you are new to the world of cryptocurrency, you will find the platform very easy to use. It is recommended that you should enable two-factor authentication because it provides your account with an extra layer of security.

The layout of the website is quite modern and clean and this also includes the markets overview screen. You can easily see the currency pairs available for trading and can make a selection between NEO, BTC, USDT, KCS and ETH. After you have chosen a trading pair, you will be taken to the trading screen that will show you the order book and you can buy and sell the currencies of your choice. In terms of fees, the platform’s aim is to charge as little as possible for both withdrawals and deposits. Therefore, Kucoin is regarded as one of the most affordable exchanges because you can make a deposit for free and depending on the asset you buy, the trading fee is only 0.1 percent.

Coming onto withdrawal fees, this also depends on the cryptocurrency you want to withdraw. However, there are some cryptocurrencies on which no fees is applicable on withdrawal either and these include NEO and GAS. For others, very low fee is applicable such as 0.001 for LTC, 0.0005 for BTC and 0.01 for ETH. Withdrawals will less fee are processed immediately whereas others might take a bit more time. Another essential thing to note is that the majority of the fee charged by Kucoin simply goes back to the users.

In one way or another, Kucoin returns 90 percent of the total trading fee to the users and only retain 10 percent. The biggest portion is 50 percent of the fee, which is given as Kucoin Bonus to users who have KCH in their accounts. The other 40 percent is shared with the other users as invitation bonus. This is not the only way Kucoin has made a name for itself in a market full of numerous cryptocurrency exchanges. It boasts some other outstanding features such as excellent customer service, a powerful interface and an experienced team that make it a good option for traders.

Some notable features that users can enjoy at Kucoin are:

1 - The customer service at Kucoin is efficient and reliable and they can be contacted 24/7 via email, hotline as well as the website.

2 - An underlying technology is used by Kucoin that enables it to support a huge number of cryptocurrency trading pairs. BTC, ETH and USDT markets are included in the initial list and it is also possible to trade pairs with numerous ERC20 tokens, LTC, KCS and NEO. This list is expected to expand and a new and unique feature will also be added that will allow people and cryptocurrency managers to register the cryptocurrency pairs of their choice and start trading. Kucoin is constantly adding new currencies and on December 29th, 2017, LAToken, QLink and UTRUST were added whereas TFL was listed a day earlier.

3 - The cryptocurrency exchange also has a very powerful and impressive API interface and Kucoin also has a consultant team comprising of financial experts are also ready to assist.

4 - Kucoin has also made use of multiple security levels for its storage wallets. A private network architecture has been used for storing its micro-withdrawal wallets. These wallets were built through Amazon Web Services cloud, which has enabled the wallets to benefit from the multiplayer firewall of the cloud. As far as the documentation of these wallets is concerned, it has also been given multi-layer industry-level encryption. Macro-wallets, on the other hand, are typically kept in banks.

5 - Another thing worth mentioning about Kucoin are the operation strategies used by the platform. The operation team is constantly working on longterm online and offline operations and promotion. As mentioned above, most of the commission is given back to the users as a reward and these incentive policies will help Kucoin in improving business and sustaining high levels of enthusiasm. New subscribers and traders can also be brought in through the invitation bonus.

6 - The invitation bonus is paid out to registered users for inviting new ones. Those who send out the invite will receive a portion of the trading fee paid by their invitee.

Hence, Kucoin might be a recent arrival in the cryptocurrency world, but its competitive trading features are enough to help it become market leader in a short time.
Email ThisBlogThis!Share to TwitterShare to FacebookShare to Pinterest
Home
Subscribe to: Posts (Atom)