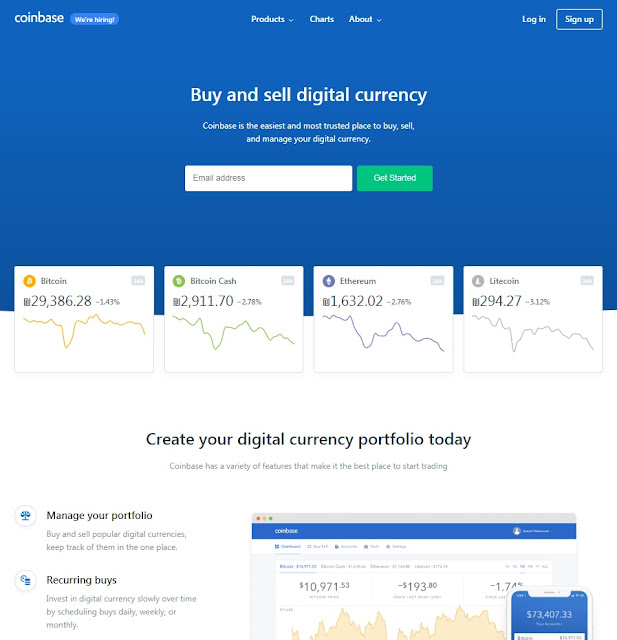 In the last year, the interest in cryptocurrencies has increased rapidly and so has investment. It is not surprising to know that there is an increase in demand for secure and safe exchanges for facilitating the purchase of these cryptocurrencies. A number of such platforms have been launched, but very few cryptocurrency exchanges have been able to carry a name as prominent and recognized as Coinbase. This particular exchange is operating in 32 countries since its launch in 2012. Based in San Francisco, Coinbase has served nearly 12 million customers and enabled them to exchange digital currencies worth $40 billion.


Within a year of its launch, Coinbase had succeeded in becoming the largest cryptocurrency exchange in the world and had also earned the title of being the Bitcoin startup with the highest funding. As compared to other exchanges on which users have to trade on the market, Coinbase gives traders the opportunity of trading their cryptocurrency at a set price based on their market value thereby enabling them to purchase cryptocurrencies at a faster rate than other exchanges. Moreover, Coinbase is also one of those few exchanges that have given their traders the option of using their credit cards along with bank transfers.

The fee charged by Coinbase ranges between 1.49% and 3.99% and the variation is primarily due to the payment method being used. The trading fee for credit card transactions tends to lie on the higher end of the scale. In contrast with its competitors such as CEX and Coinmama that have a similar business model, Coinbase fees are lower. Currently, traders can only buy Ethereum, Bitcoin and Litecoin on Coinbase, but the exchange does have plans of adding more currencies. As far as ‘hard forks’ of cryptocurrencies are concerned such as Bitcoin Gold and Bitcoin Cash, Coinbase has said that they will be added to the platform once some guarantee regarding safety is obtained.

The GDAX exchange is also operated by Coinbase, which is designed to focus on professional traders. The cryptocurrency exchange also began to support Segwit enabled Bitcoin wallets from February 2018 as this helps them in reducing the withdrawal fee on the website.

If you have decided to use Coinbase for cryptocurrency buying and selling, you first have to make an account. How can that be done? Here are the steps that you need to follow:

1 - The first step to create an account on Coinbase is to provide them with your name, password and email address.

2 - You will then be asked to provide confirmation for your email address and once this is done, you will be redirected to the website again. Now, you need to decide what kind of account you wish to set up; business account or individual account.

4 - Setting up your payment method is the next step. As outlined above, there are two methods offered by Coinbase, which are credit card and bank transfer. In the case of bank transfers, one or two small transactions will be setup by Coinbase for verification of your account. In the case of credit cards, you will have to provide a screenshot of the card itself. US bank transfers can take approximately 4 to 5 days to complete whereas SEPA transfers in the European Union are between 1 and 3 days. Debit and credit card transactions are completed instantly. Users also have the option of linking their PayPal account on Coinbase, but it can only be used for the proceeds obtained from selling.

Newcomers who are just joining the cryptocurrency world still believe that investing in cryptocurrency through exchanges like Coinbase is risky. While it is true that in the past cryptocurrency exchanges have encountered some trouble, but Coinbase is regarded as one of the most secure platforms that you can find these days. First and foremost, this exchange is based in the United States, which means that it has to comply with US State as well as Federal laws and regulations. In comparison, other exchanges are based in countries where regulations are a bit lax.

Furthermore, Coinbase has also consulted with regulators to ensure that they are providing an innovative and open financial system and its regulation seems to have provided the entire cryptocurrency with confidence. Also, it is worth noting that some high-profile backers have chosen to invest in Coinbase, which include BBVA and the Bank of Tokyo and this helps in boosting legitimacy. Moving onto funds storage, another appealing fact about Coinbase is that it practices transparency in its methods. Customer funds are segregated from the company’s official funds. Coinbase has mentioned on the website that custodial bank accounts are used for storing customer funds.

Hence, even if the exchange is declared insolvent, neither its creditors nor Coinbase itself will be entitled to these funds and will have absolutely no rights on them. About its cryptocurrency storage, the platform has stated that offline storage is used for 98% of crypto funds in the form of paper wallets and hardware wallets that are kept in safety deposit boxes and vaults all over the world. Coinbase has also added that the remaining portion that’s kept online is also insured and this policy will ensure that customers get their funds back in case of a hack.
Email ThisBlogThis!Share to TwitterShare to FacebookShare to Pinterest
Labels: Coinbase, cryptocurrency exchanges
Newer Post Older Post Home